Who is the highest paid person at a startup? 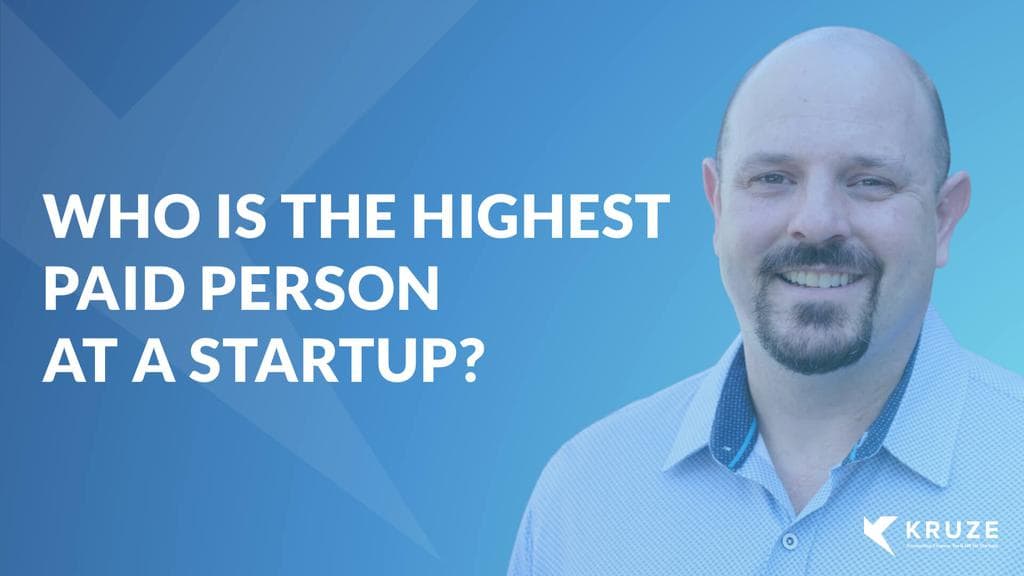 Most people would think the founder or CEO is the highest paid person at a startup. But that’s not the case. Typically one of two people, the VP of sales or the CTO, are the highest paid employees at early-stage startups.

And when you think about it, there are actually some good reasons for the sales or technology leader being the highest paid people at a startup. First of all, salespeople are notoriously motivated by money. The best salespeople are competitive, and money making is a way of keeping score. They really love achievement, they really love closing deals, they like to keep score through that, and so oftentimes VP of Sales is the highest paid person at a startup because they bring in the money.

How Sales Leaders are Paid at Startups

Sales leaders at most startups are not base salary heavy people. In fact, many times they have some of the lowest base salaries in the whole company - or at least on the low end of the spectrum. And the reason for that is the company’s incentive structure wants them to be very, very focused on bringing in new sales and not just kind of showing up to work and putting their feet on the desk. So for VP of sales, you’re going to see a low base salary, you’re going to see a heavy commission load, and you’re going to see some really big accelerators. A super simple example of accelerators would be like once the VP of sales or the sales team hits their goal for the quarter, every commission after that is at 120% of the rate that it would normally be at. In our experience, the commission is usually one third to half of the on-target pay for sales leaders.

Many founders don’t quite understand how important it is to pay aggressive bonuses/commissions to salespeople. You want them to be making a lot of money. I get a lot of calls from founders who are dying on the inside, because they’re seeing how much money they’re paying their sales team and they don’t make that much money.

But I always remind them that the sales team and the VP of sales are directly aligned with the sales goals of the company. And for revenue generating startups, revenue growth is how you “prove” to the world that you are worth something - it’s how you raise the big VC rounds and how you exit for hundreds of millions, if not billions. So heavy sales team pay is an investment that’s well worth it.

The second person who might be the highest paid person at a startup would be the CTO, lead engineer, VP of engineering, someone who is very irreplaceable on the technology side. At a technology startup, the CTO is just one of the most important people in the company. It’s also really hard to find a good CTO/VP of engineering/founding engineer.

And so those people are paid very, very well. So again, the CEO, founder, may be looking at those salaries and thinking oh my gosh, it’s so much money, but that is also a really, really good investment. And holding onto these people is really, really important for continuity and making progress in the business.

Founders have a different compensation structure

Founders should be motivated by the equity they have from founding the business. Cash pay is not the primary motivator for founders. We have some really good metrics on this - visit our Startup CEO Salary Report to see the data - the average cash salary is $146,000 in 2021.

And while that’s probably a lot lower than a top-tier sales leader or CTO would get, the founder should own 20 to 50% of the company. If there’s two co-founders, obviously, it’s probably going to be more like the 40% kind of zone. But the founders are going to have tremendous upside, but that’s usually the bargain they make. They want that upside. They’re willing to forgo the big salaries. Oftentimes founders could be working at Netflix, Google, Facebook, wherever, making huge salaries, but they’ve chosen the path of building their dream and try to change the world while getting that big equity upside.

Another thing I’d say is, I just want to kind of chime in on this, but it’s really important if you’re a founder to pay yourself something fair and something you can live on, especially when you’re in these high-cost markets like San Francisco, New York. Your venture capitalist, contrary to what people think, actually wants the founder to be paid fairly and have a decent lifestyle. They don’t want you to be super poor and thinking about money in your bank account all the time, because that’s distracting. They want you to be thinking about the business and growing the company all the time, not thinking about a check that bounced or how are you going to pay for groceries, right? So have that conversation.

Hopefully you find this note on the highest paid employees at startups helpful!