What are average startup founder salaries in 2022?

CEO and Founder of Kruze Consulting

In the US tech startups that have raised money tend to pay their founder CEOs about $150,000 per year (updated for 2022 data). My firm runs payroll, accounting, etc. for funded startups (seed and venture stages), and we annually conduct a study of startup CEO salary. Our most recent study looked at CEO and founder pay at over 250 funded startups.

In addition, for 2022 we also analyzed the data for chief technology officers (CTOs), to determine startup CTO salaries in early-stage companies.

Use this calculator to estimate the range in pay that founders can expect, in the US, based on the amount of venture capital raised, stage of the company and industry.

In 2022, the average startup founder at a funded startup makes about $150,000 - while the median founder makes closer to $140,000 per year. However, founder compensation varies by the amount of capital that a startup has raised. Below is a breakdown of founder salary by funding raised:

Our data shows that founder CEOs tend to make about the same as non-CEO founders at VC backed startups, although this may start to diverge after a company has raised tens of millions in funding. At that point, the CEO often makes more money than most other founders (except sales founders!). Additionally, later-stage companies are more likely to replace their founder-CEO with a “hired gun” CEO, and these outsiders tend to make quite a bit more than a founder would.

Startup founders tend to make higher salary as the startup raises later stages of funding. This makes sense - as a company becomes later stage, it is not only de-risked (and can therefore afford higher founder compensation), but also should have more resources - both cash from investors and hopefully revenue.

HOW MUCH SHOULD FOUNDERS PAY THEMSELVES AFTER RAISING SEED FUNDING?

We used to recommend seed stage founders pay themselves about $119,000, but over the past few years that has increased to about $130,000.

CEO pay varies by a number of factors, including the executives previous experience, the amount the company has raised, the startup’s traction and the industry the startup is in. As we looked across different industries, our data showed that CEOs in different industries have higher average salaries than others. For example, salaries in Biotech tend to average more than those in other industries. Founders in biotech tend to come with academic credentials, and previous experience, that founders in other industries don’t always have (M.D., PHD), and thus warrant a higher annual salary.

So to answer the most obvious question:

How much do startup founders pay themselves?

Founders of VC-backed startups pay is influenced by the amount of funding that the company has raised, the founder’s role in the company and the company’s industry. Pay ranges from $0 (zero!) to over $300,000, with the average founders pay in 2022 being $150,000. Note that the owners of LLCs should consult a tax CPA - there are particular tax strategies about when to take an S-Corp election and begin drawing owner’s salaries that are unique to LLCs. Our information is for Delaware C-Corporations that are raising outside capital only!

Compensation varies by role, although not by as much as you’d expect. At the earliest stages, technical founders (in the CTO role) tend to be paid more than their CEO counterparts. This is likely because experienced engineers are difficult to hire, whereas anyone can be the chief executive officer of a startup that they found.

What Investors think about Founder Pay

In my experience, investors in seed funded startups tend to want the founders to take enough salary to not have to stress too much about making rent payments or buying food - the goal is to be able to completely devote your time to growing the company. Experienced investors also know what is typical for your type of startup, and expect you to have pay inline with similar companies. Founder pay is something that you can and should discuss with your investors prior to the investment so that there is no discord post-funding. One way to show your investors what you expect to earn as a founder/CEO is through a detailed financial model that outlines the various ways that you will use the investor’s capital. If you disclose your expected pay in a model, and if it is a reasonable amount, then you shouldn’t have any problems.

Our original data from 2018 showed that the average CEO pay for a funded company is $130,000 per year - and other founders, such as technical, operations or sales founders, tended to take the same as the CEO. 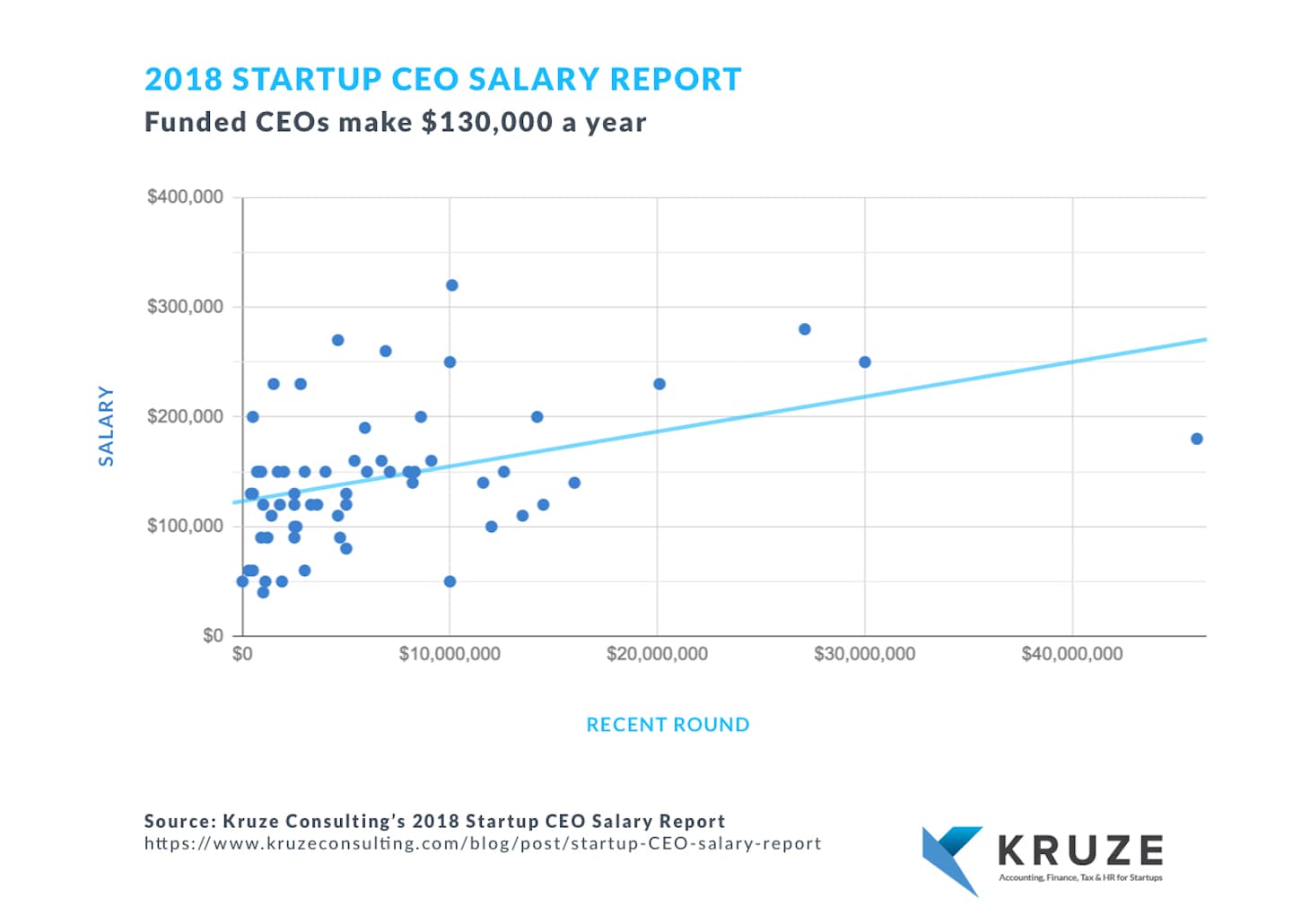 We work with a lot of investors, and many of them share a similar founder pay philosophy: 1) take enough salary to not have to worry about meeting rent - don’t get distracted growing the business because you can’t afford to live! 2) take a “normal” amount of cash compensation, as in, an amount that isn’t wildly more or less than what similar companies pay their founder executives.

To help you understand more about what’s “normal” pay, here is another dataset from my company’s analysis. We’ve got more info on our blog as well, in case you are interested. 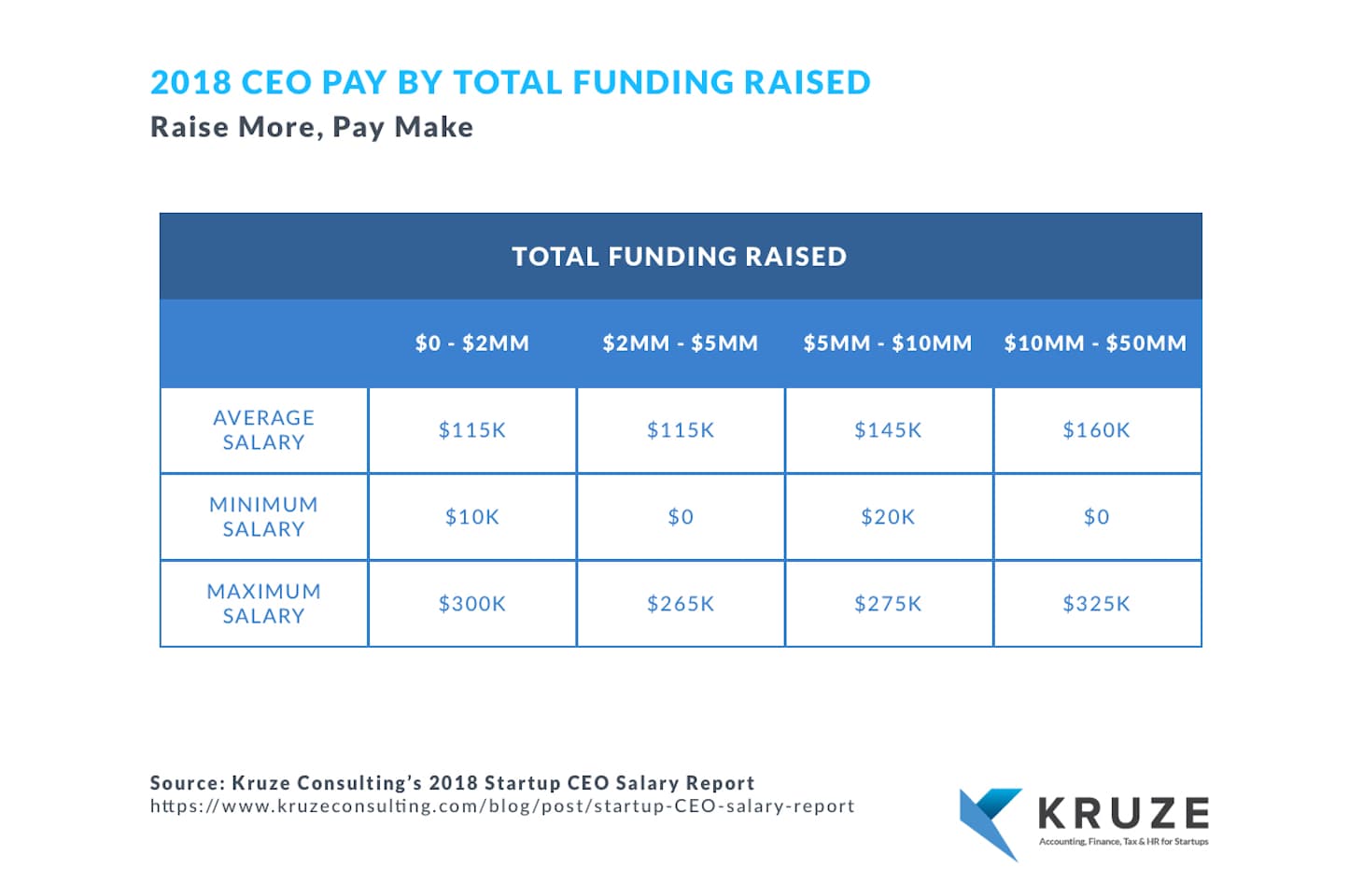 Startup Founders and Entrepreneurs
View this question on Quora

Thanks for reaching out! Please note that January - April is our busiest time of year.
Please excuse any delay in response times!

READY TO CONNECT FOR A FREE CONSULTATION?

We are the experts at helping seed/VC-backed Delaware C-Corps with their accounting and finances!

Talk with a real accountant, not a generic salesperson!

Help us get in touch