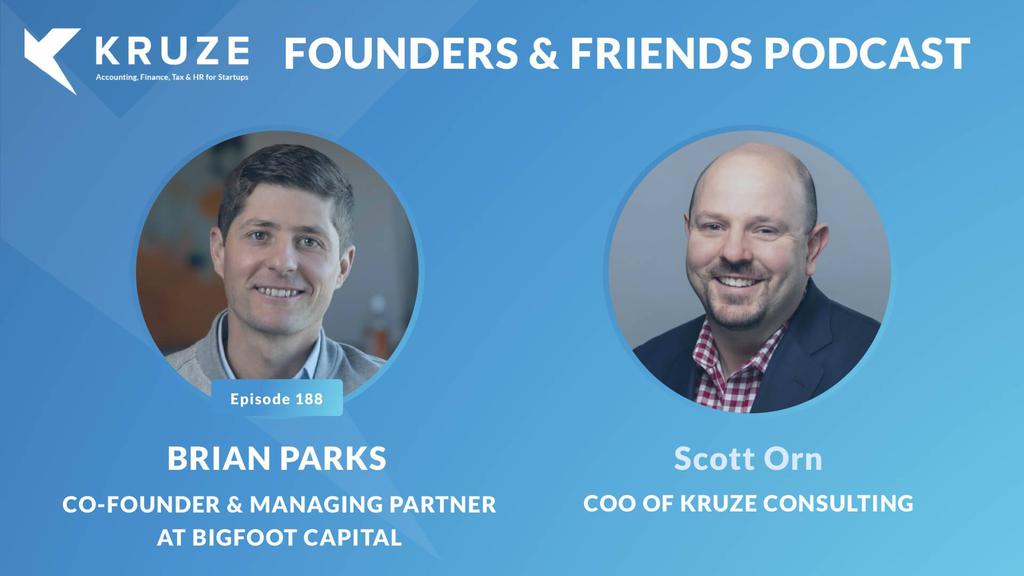 Brian Parks, the CEO of Bigfoot Capital, was recently interviewed on Kruze Consulting’s Founder & Friends startup podcast. He talked to Scott Orn, COO of Kruze Accounting about how Bigfoot got its start, how startups are underserved, the worst practices around capital raise, and so much more.

You can listen to the full episode here, but here are a few highlights raised by Brian during the interview:

95% of startups are underserved.

Unfortunately, not all startups that try for venture capital funding get it. In reality, only about 5% of startups get VC funding. This is where Bigfoot Capital comes in.

“If there are a hundred SaaS companies and five of them are going to be venture capital-funded, what about the other 95? Some subset of those should be financeable in some format. Venture debt doesn’t really solve that, traditional venture debt, right?

It’s still looking to that 5% that have raised venture equity because that’s what it is. Venture debt lenders are looking, to a heavy degree to the sponsors, the venture capitalists that are backing that company with equity, right? And if that’s not in the picture, it’s not a viable financing option for the non-venture-backed company, via the bank venture debt lender, or a non-bank venture debt lender.

I think that’s where people get a little bit hung up or confused is, “Oh, okay. I like venture debt. Yeah. I can get venture debt.” Well, are you institutionally venture capital-backed, and who is the actual venture capital fund backing you? Because they’re not all the same, right? That capital [venture debt] may not accessible to the fund if they’re not deemed to be quality enough and then, in turn, venture debt is not available to you.” ~ Brian Parks

Scott Orn, COO of Kruze Consulting couldn’t agree more. “But you’re right that 95% is underserved or not served at all right now. The 95% that don’t have the Sand Hill Road VC or the premium Boston or New York VC firm in them. Certainly five years ago, there was no capital available, no debt capital available for those companies and now folks like you, Bigfoot is actually bringing capital to that market.”

If founders are going to raise capital, they can’t be casual about it. They have to have a plan. They have to know what they are going to do with that raise and be able to explain that to a potential investor. The raise should be to support things that will bring about growth, such as sales and marketing. You can check out Bigfoot’s blog for their series on capital raise worst practices.“We’re looking for opportunities where founders understand that and are able to measure that success within their sales and marketing spend … So important to note that if you’re really still doing pure R&D on your product, your core product, you haven’t gone to market, you haven’t acquired a significant amount of customers that you’ve been able to renew and shown that in the data, you’re generally speaking going to be too early for us. That’s really equity capital.” ~ Brian Parks

In this podcast interview, Orn asked Parks if there is a certain timeline that founders should consider when raising equity. In other words, should they aim to raise equity to support 12, 18, or 24 months of activity?

Parks answered, “for us, it’s not that 12 to 18-month concept. … When a company comes to us, it does vary, but let’s just say, we’re not expecting when we lend money to a company for them to keep on an ongoing basis, 12 to 18 months of runway, right? It is common for us to provide subsequent capital, right? So we’re going to say, ‘Hey, don’t go below this. If that’s three, four months or some minimum amount of cash in the bank balance.’ .. Again, it’s just kind of situational. So it’s where are you, do you have projections? What do your projections look like? Where are you trying to get? And are you reasonable with what the potential outcome can be? whether that’s a subsequent financing event, a M&A transaction, or just cash flowing the business”

Scott Orn, COO of Kruze Consulting and host of the Founders & Friends podcast, had the following to say about Bigfoot Capital:

“You’re not just the typicalventure debt that I’m used to doing, you’re more opportunistic and more flexible. I think it’s a really good selling point for entrepreneurs out there.  Congrats on proving it out, really, you proved it out over the last four years. So congrats and we’ll be sure to send you some Kruze clients.”

And so much more …

Again, this is just a snippet of the podcast interview. So much more was discussed. You don’t want to miss this podcast.

For the full listing of the Founders & Friends startup podcast, go here!