How many co-founders should a startup have? 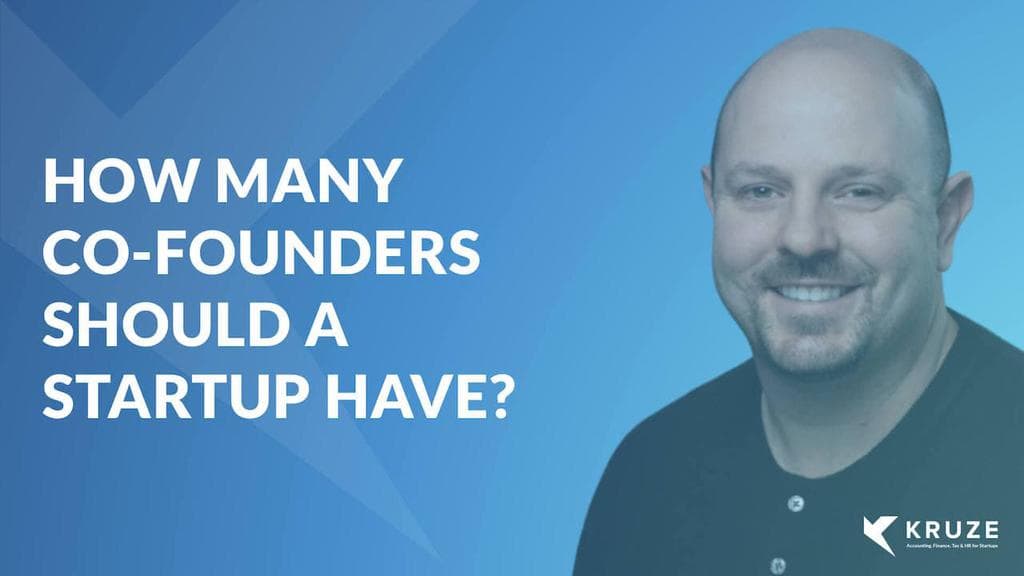 Today I’m answering the question, how many co-founders should I have in my startup?

And really the bottom line answer here is, whatever it takes or however many people you need. Kruze Consulting has over 700 clients now that have raised billions in venture capital. Most have two or three founders, a few have one founder and a very few have more than three - maybe four or five.

So, you’re trading off a couple of things when you make the decision to have multiple founders.

Trade off for startups with multiple founders

First of all, co-founders have to be incredibly dedicated and have an almost unhealthy belief in the company’s concept. Because it takes a lot to get a startup going and most people will call you crazy for whatever type of company you’re building. So, it’s rare to be able to find someone who shares your vision and is willing to go all in on it.

You also don’t want to have so many co-founders that there’s a diffusion of responsibility, whether that’s kind of work responsibility or emotional responsibility, emotionally tied in. I always use the analogy that you need to be in the boat together, paddling towards the shore. Because it gets lonely, there’s some very dark moments. It can be really hard.

And so, you want to have enough support and be able to support each other, but you also need to have not so many people that there’s kind of a diffusion of responsibility, where people can get away with slacking or not doing what they should be doing.

You also want enough co-founders so that there are different expertises. So oftentimes you’ll see two co-founders partner up, one is kind of like the business woman, business guy, and one is a technical co-founder.

And that’s because oftentimes, it’s a little bit easier to separate the daily to do’s there. And you each have your own sandbox. Of course you’re accountable to each other, but you’re not duplicative. And you can actually kind of go ahead, work, execute, get stuff done. And the fundraising woman or the business woman is in charge of raising money and hiring people and building out all the business operations and the CTO. The woman who’s doing that, is in charge of building the product and recruiting engineers, and actually mapping out the vision for the product. And so you really don’t want to have like two cooks in the kitchen on one of those sides, usually as a co-founder. Because people end up kind of stepping on each other’s toes.

So, the conventional kind of two people in the boat together usually works best for me. Because, what I see working best, because it’s very clear who owns what. Everyone is tied in, everyone is emotionally vested. But, definitely see times where the three people work.

When a single founder works best

And then, there are those moments where there’s a startup with a single founder, one who’s just so dedicated. And that person needs to learn how to delegate very quickly, and also make employees have that emotional aspect where they feel like a founder, whether they are or not, whether the early stage people in that company really need to contribute. But that’s a skill. Making sure that people are emotionally invested and being able to delegate quickly and responsibly is a real skill.

And so if you’re one person founder, you’re going to learn that very quickly or you’re not going to make it. And so the startup ecosystem is really, really tough. It’s almost like you either make it or you don’t and you look back if you don’t make it. And there’s probably 10 things you did wrong and that you could have done better. But you know what? When you’re a company that makes it, and you do the same thing, you look back and you’d probably say, you know, maybe not ten things, but there’s eight things we could have done better.

So the margin between failure and success is very, very thin. I think that having a second founder can really make the difference. Having at least one person in that boat with you, helping you, pulling the same way and being there for each other is really, really valuable.

So I hope that helps answer the question. How many co-founders should a startup have? Thanks.