Why Would a Founder or CEO of a VC backed startup get fired? 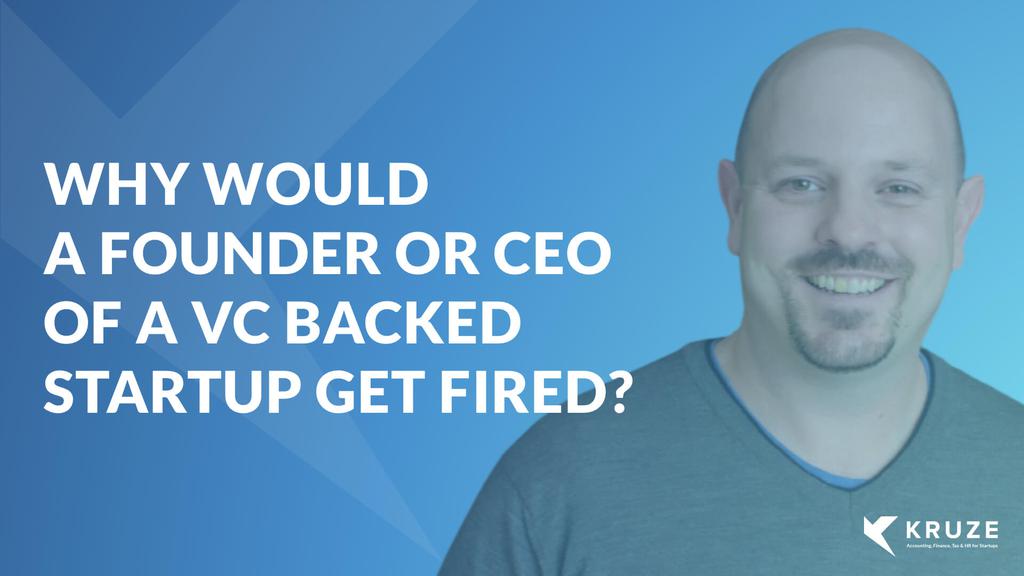 Today we’re answering the question: Why would a founder or CEO of a VC-backed startup get fired?

It’s really important to state upfront that no venture capitalist or board member ever wants to fire the founder from a startup. For every investment, the VCs went to their partnership and said, “we have to invest in this person, their vision is so amazing. We want to be a part of this and we can get a really great financial return on it.”

So the people who are pulling the trigger on a termination of a founder, are doing it, not because they really want to, but because they feel like they must. And remember that venture capitalists or board members are fiduciaries of the company. No matter how much they like the founder they have to look out for the company and for the shareholder value.

Founders and CEOs of startups are really only fired when the investors feel like their hands are forced or that they have to make a change.

So why are founders and CEOs fired by VCs?

The first and definitely the biggest reason that VCs fire founders and CEOs is negative surprises in cash management. And this can be a couple of different things. This can be spending way too much money, way too fast. This could be misinforming the board about how long your cash runway actually is. Or sometimes the founder is so disorganized as a CEO that, unfortunately, that they actually don’t know how much money they’re spending. And so you’re not just like surprising the VCs but you’re surprising yourself. And so this is definitely the biggest thing.

Again they’re putting their credibility on the line with their partnership and in the industry. And so if they can’t trust you to spend the money wisely, to have a nice planned out cash runway, to hit milestones, and to have an organized view of the company.

I’ve definitely heard nightmare stories of VCs putting in a bridge loan or a round thinking it’s going to last 18 months. And then nine months later, they’re at a board meeting being asked to put in a second check. And they’re like, what? Like we just wrote the first check. And so that’s surprising them is the biggest thing.

Now, if you’re increasing your burn rate because the opportunity is so attractive or you missed a couple of quarters, but you’re communicating with the VCs and the board members, that’s different. That’s not a surprise. The surprise is when they start questioning whether they can actually trust you as the founder or not.

Another major issue is recruiting. Venture capitalists know that building a really strong team is really paramount. You’re not going to build a great startup without attracting really great people. And oftentimes the VCs will do a lot of recruiting on behalf of the company, but they need the co-founders, the CEO, to be able to recruit really talented, dedicated people. And so if they see repeatedly that you’re not able to recruit the right kind of person or get enough of those people, that’s a reason they might make a change. In today’s hot job market they’re going to be very lenient on this. Everyone knows recruiting is hard, but this is a core capability of a good founder. On the flip side, like having a lot of churn at the company especially in the executive ranks, is going to be something that’s a signal to the VCs that you’re not doing something right. So not hiring or retaining good talent is a major reason that VCs fire founders and CEOs.

Another item to think about is that venture capitalists or board members will call that executive team members and get the scoop. Like they are not shy about getting that person’s side of the story.

And achieving those milestones is really important because if they are achieved, the VCs know that the company will be able to raise more capital from other venture capitalists. And the venture capitalists will give you really good feedback on how real your milestones are. Some of these milestones are what you’d put into a startup’s financial model. Others are less financial, but still are very important. Are they going to be enough to raise money for the next round? And so when you come short, they know in their head a couple of things, the company has missed our numbers. They missed the target they’re supposed to be hitting. And also when that happens, they’re probably going to have to write another check and jump in and help save the company.

A lot of times these unexpected investments are in the form of a bridge loan. And so if you’re missing your milestones repeatedly, almost by definition, you’re going, it means you’re going back to the investors asking for more cash. And so, again, that’s one of those things. And if you’re missing your milestones you’re just not going to be able to get outside VCs interested in the company. And so that’s another reason they might make a change.

And the final, big reason is hopefully obvious these days but just harassment or tolerating a culture of harassment. I think people understand that it’s not appropriate for harassment to happen in the workplace at all.

But if you’re a founder or CEO and you maybe you’re not harassing people directly but you’re tolerating or facilitating a culture of harassment, that’s just as bad as actually doing it. And so that’s going to be the quick hook. If the board sees that there’s a culture of this and that it’s a pattern happening they’re going to want to make a change and they should. And so there does need to be a change. So those are the big reasons. I think the way to avoid an outcome like this is good communication, good expectation setting. Again, maybe fall short on your numbers a couple quarters in a row.

That doesn’t mean you’re going to get fired. If you’ve been communicating with the board in a very healthy open way, and then, focus on being organized in your financials, knowing exactly what your runway is and what your burn is. That allows you to be a good communicator financially on financial topics with the board. And then recruiting great people making sure you hit your milestones and then creating a positive culture not a culture of harassment or somewhere where people don’t want to work, or people feel uncomfortable. Those are the keys.

So I hope that helps if you have any questions or actually input, hit us up at up at kruzeconsulting.com. And we look forward to talking to you. Thanks so much.

How to Handle a Co-Founder Departure

What’s the difference between primary and secondary shares at a startup?

What are VC Fund Reserves?